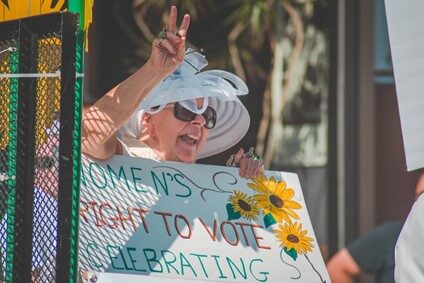 One hundred years ago women were granted the right to vote with the adoption of the 19th Amendment to the United States Constitution. [1] Pennsylvania was an early embracer of women’s suffrage and was the seventh state to ratify the amendment. [2]   Many Pennsylvanians played a crucial role in the movement.

The beginning of the women’s suffrage movement can be traced back to the Quakers and “their belief that all people are equal and worthy of respect.” [3]   In 1681, Quaker William Penn, convinced that religious freedom would never be achieved in England, asked King Charles II for a charter to allow him to establish an American colony.  The King agreed and suggested the name “Pennsylvania,” or “Forests of Penn.” [4]

Pennsylvania became a sanctuary; it was the only colony where religious freedom was promised to all who settled there. [5]   In almost all other colonies, the land was stolen from the Native Americans, while Penn negotiated peaceful purchases with the Susquehannocks, Shawnees, and Leni-Lenape. [6] He traveled unarmed, learned their dialects, and acquired land through peaceful, voluntary exchanges. [7]   Penn delivered Pennsylvania a written constitution that “limited the power of government, provided a humane penal code, and guaranteed many fundamental liberties.” [8] Further, Penn insisted that women be treated equally. He believed that women deserved the same rights as men. [9] He encouraged women to become educated and speak out, just as men did. [10]

The Quakers continued to be a dominant force in the fight for equality. [11] In the early 19th century, Philadelphia Quaker Lucretia Coffin Mott was a leading thinker and organizer of the women’s suffrage national movement. [12]   As a founder of the Philadelphia Female Anti-Slavery Society in 1833, many criticized Mott for her public speaking and for “behaving in ways not acceptable” of her sex. [13] Undeterred from the condemnation, Mott became an advocate for women’s rights. [14]

Mott and Elizabeth Cady Stanton organized the first Women’s Rights Convention, which was held in Seneca Falls, New York, in 1848. [15] During this meeting, the women presented a “Declaration of Sentiments”, which inserted the word “woman” into the language of the Declaration of Independence. [16] The Declaration included a list of women-centric demands, including the right to vote. [17] This launched the women’s suffrage movement. [18]
Mott said that she grew up “so thoroughly imbued with women’s rights that it was the most important question” of her life. [19] After the convention, Mott continued her battle for women’s equality. She authored Discourse on Women, became the first president of the American Equal Rights Association, and was instrumental in establishing Swarthmore College as a coeducation institution. [20] Mott led the way for more women to become a part of history. [21]

Although most have been forgotten to history, countless Pennsylvania women worked tirelessly in the 19th and early 20th centuries to expand the suffrage movement. [22] These influential women include Carrie Burnham, who was arrested for attempting to vote, Augusta Fleming, who organized Pennsylvania’s first suffrage march, and Daisy Lampkin, who promoted participation by African-American women. [23]

In 1871, having believed she properly met the qualifications under the Pennsylvania Constitution to vote, Carrie Burnham presented her ballot to the judge and election inspectors in Philadelphia’s 14th ward. [24]   As she expected, her ballot was refused. This refusal set her up for the opportunity she sought: the chance to argue her claim in a higher court. [25]

Burnham began proceedings in the Supreme Court of the Eastern District of Pennsylvania. She argued that she met the criteria outlined in Article 3 of the Pennsylvania Constitution of 1838, which required a person to be a “freeman” to qualify as a voter. She further argued that the 14th Amendment of the United States Constitution protected her right to vote because she was a U.S. citizen and therefore was guaranteed all the privileges thereof. [26] The case came down to two questions: was voting one of the privileges guaranteed to citizens, and did the word “freeman’ include women?  The judge answered both questions in the negative, and ruled for the defendants, laying the ground for Burnham to argue her case before the Pennsylvania Supreme Court. [27]

On April 3, 1873, Burnham began her argument in front of the Pennsylvania Supreme Court. [28] She focused on three major points. [29]   “First, that elective franchise was ‘a right of women under the Constitution of Pennsylvania.’” [30] “Second, that the elective franchise was ‘a right of woman under the United States Constitution.’” [31] “Third, that ‘the denial of her right to the elective franchise [is] an injury to woman, society, and the state.’” [32] Burnham proclaimed that voting was the only protection women had against tyranny and that men representing women was no different than former masters representing their former slaves. [33] After her argument, the judges saw no need to hear from the defendants’ counsel. [34] They confirmed the lower court’s decision and denied Burnham the right to vote. [35]

The fight for women’s voting rights in Erie County was one of the largest grassroots movements in the country. [36] Augusta Fleming was the president of the Northwestern Pennsylvania Equal Franchise Association. [37] She urged women to fight for the right to vote by organizing the first women’s suffrage parade in Pennsylvania. [38] On July 8, 1913, hundreds of women marched during the Perry Centennial celebration, each donning the movement’s trademark white with blue Pennsylvania sashes. [39]

Fleming said, “[a]ll women should feel a duty to pass on to their daughters the rich heritage of political freedom.” [40] “Gain victory over fear and walk firm and erect . . . [r]emember that you are only one in a great army . . . [y]ou are trying to gain citizenship that you may do your part to bring about better legislation for the protection of . . . the weak.” [41]

Daisy Lampkin understood the connected oppressions of race and gender. [42] Lampkin’s social and political activism began at a young age. [43] When she moved to Pittsburgh in 1909, she began working as a motivational speaker for housewives who wanted to get involved in protesting for suffrage. [44]   Lampkin hosted meetings and gave street-corner speeches. [45]   She rallied for women’s right to vote and ensured participation by African-American women. [46]

Pennsylvania suffragists embarked on a symbolic equal rights campaign to elicit support and votes from the men who would ultimately go to the polls. [47] In 1915, Chester County activist Katharine Wentworth Ruschenberger came up with the idea of casting a copy of the Liberty Bell. [48] The Justice Bell, also known as the Women’s Liberty Bell and the Suffrage Bell, was a bronze, full-size replica without the famous crack. [49] Engraved on the side was the inscription:

PROCLAIM LIBERTY THROUGHOUT ALL THE LAND UNTO ALL THE INHABITANTS THEREOF. [50]

The clapper was purposely chained to prevent the bell from ringing as a symbol of the silenced voices of women deprived of the right to vote. [51]   Ruschenberger said that the Liberty Bell “announced the creation of democracy and the women’s Liberty Bell will announce the completion of democracy.” [52]

Suffragists escorted the bell on the back of a flatbed truck to all 67 Pennsylvania counties. [53]   The bell was intended to drum up support of the proposed amendment to the Pennsylvania state constitution that would give women the right to vote.  Unfortunately, the referendum failed. [54] However, the suffragists did not give up and instead turned their attention to the introduction of an amendment to the United States Constitution. [55]   The bell was used to support the 19th Amendment at national political party conventions around the country. [56]

The Justice Bell rang for the first time on September 25, 1920, in Independence Square in Philadelphia, to celebrate the ratification of the 19th Amendment. [57]   Katharine Wentworth, Ruschenberger’s teenage niece, was given the honor of ringing the bell for the first time. [58]   She stood surrounded by 48 women dressed in suffragist white, one to represent each state in the union. [59]   The bell rang out 48 times. [60] Later that fall, Pennsylvania women were able to vote for the first time in history. [61]

[48] Did You Know: The Justice Bell and the Fight for Women’s Access to the Vote, Nat’l Park Service, https://www.nps.gov/articles/dyk-justice-bell.htm (last visited Nov. 5, 2020) [hereinafter Did You Know].