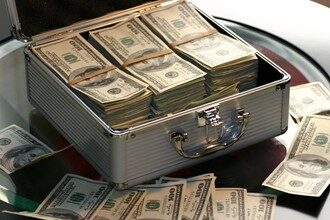 “Consumers have laws protecting them from usurious interest rates… but for small businesses, those protection laws don’t apply at all.” [1] [2]

Par Funding was registered in August of 2013 as a fictitious name belonging to the Complete Business Solutions Group, Inc., which was also registered in August of 2013 in Philadelphia, Pennsylvania. The business was founded by Joseph W. LaForte along with his wife, Lisa McElhone. [7] [8] Previous to the founding of Par Funding, LarForte and his brother were charged with defrauding personal clients and lending institutions in real estate transactions in excess of $14 million over the course of 17 months. [9] Prosecutors alleged that the brothers used a relative who was a criminal defense attorney to set up a law office through which the real estate deals could be closed. [10] The law office opened an attorney’s trust account to help attain loans. [11] The attorney, Joseph LaMattina, reportedly did not take part in any deals, however, he received a stipend for each transaction.

LaMattina later argued that if the allegations against him were established, he would have been indicted or at least sued for a large amount of damages considering the finances at play. However, he was not indicted or sued. [12] He characterized his work (or lack thereof) as a corporate matter, rather than an ethical one; and that his Corporations Trust Account did not make his corporation a law firm, nor did it empower the corporation to practice law. [13] It was also noted that LaMatinna had no disciplinary history. [14] Ultimately, LaMatinna was disbarred and prohibited from practicing law in any form. [15] The brothers pled guilty in 2006 to multiple counts of grand larceny, money laundering, and conspiracy. [16] James was sentenced to five to fifteen years in prison, while Joseph was sentenced to three and a half to ten and a half years in prison. [17]

The SEC alleged that Par Funding was “opportunistic” when it came to providing loans to small business owners. [18] Par Funding allegedly would approve loans in less than 48 hours. It had borrowers sign terms that could be considered draconian, including an interest rate that averaged out to 50%, though at times the rate was reportedly as high as 875%. [19] For context, the cap on consumer loans for Pennsylvania is 6% as of August, 2020. [20] It has been argued that the industry is not providing a loan to an individual, but rather, offering an advance on the businesses future sales. [21]   Allegedly, Par Funding would often have a confession of judgement clause in the contract provided to consumers, a practice which has been banned in New York and New Jersey in 2019. [22] A confession of judgement is a term that has the borrower accept liability in the form of the amount of damages that were agreed upon, and is a way to avoid a court proceeding in the event of a dispute; as this forfeits the borrower’s right to dispute the claim. [23] Such a provision allows the lender to potentially present the note in court and obtain a default judgement. [24] One article discusses an individual who alleges that the confession of judgement enabled Par Funding to obtain an order from that court that allowed the organization to garnish her bank accounts. [25]

Several articles assert that Par Funding also allegedly engaged in aggressive tactics to encourage borrowers who were defaulting or refusing to pay. [26] One discusses in detail how an alleged agent of Par Funding told a borrower about a delinquent borrower who had been “mangled” in a car crash, and reportedly stated, “these are the kinds of things which strongly affect wives and children.” [27] Another article states that someone from Par Funding threatened to “blow up her house;” though Par Funding stated the individual owed Par Funding $12 million and that they had “12 million reasons to lie.” [28]

It is unclear, what, if anything, investors will be able to recover from Par Funding, which investors should be held liable, and which may be able to recover. Par Funding, through its lawyers, states that it should be able to pay back investors, possibly with interest. [29] Par Funding is currently under receivership; a court appointed individual or trustee who effectively manages all aspects of a troubled company’s business. [30] There are concerns that the current receivership, however, has been mismanaging funds, and that the freeze on many aspects of the business may make it virtually impossible to turn a profit, let alone pay back investors. [31]

One of the largest borrowers from Par Funding was B&T Supply, which owed Par Funding $91 million. [32]   The owner of B&T, Stephen Odzer, plead guilty to defrauding three New York banks of more than $16 million in 2005. [33] The second largest borrower of Par Funding was National Brokers of America, which owed Par Funding $35 million. [34] National Brokers has been sanctioned by insurance regulators in Pennsylvania, Oregon, Utah, and Washington. [35]   They filed for bankruptcy protection in 2019, stating that they had up to $50,000 in assets, with up to $50 million in debt. [36]

It is unclear if this particular case will provide additional impetus for change in the merchant cash advance regulatory field, but it appears to at least be drawing attention to some serious concerns.

[3] Sean Murray, The SEC Already Suffered a Major Defeat in the Par Funding Battle – But Who is the Real Loser?, DeBanked, https://debanked.com/2020/08/the-sec-already-suffered-a-major-defeat-in-the-par-funding-battle-but-who-is-the-real-loser/ (Aug. 8, 2020).

[8] Erin Arvedlund, How financial adviser Dean Vagnozzi built his brand — and drew the interest of the SEC, The Philadelphia Inquirer,  https://insurancenewsnet.com/oarticle/from-nail-salon-to-800000-how-par-funding-owner-built-fortune (Oct. 8, 2020).

[27] Zachary R. Mider and Zeke Faux, Sign Here to Lose Everything Part 5: Fall behind on These Loans and You Might Get a Visit From Gino, Bloomberg, https://www.bloomberg.com/graphics/2018-confessions-of-judgment-visit-from-gino/ (Dec. 20, 2018).

[29] Joseph N. DiStefano, Par Funding: Investors should get their money back — maybe with interest, The Philadelphia Inquirer, https://www.inquirer.com/news/par-funding-fraud-pushback-profit-20200914.html  (Sept. 14, 2020).

[31] Sean Murray, The SEC Already Suffered a Major Defeat in the Par Funding Battle – But Who is the Real Loser?, DeBanked.  https://debanked.com/2020/08/the-sec-already-suffered-a-major-defeat-in-the-par-funding-battle-but-who-is-the-real-loser/ (Aug. 8, 2020).