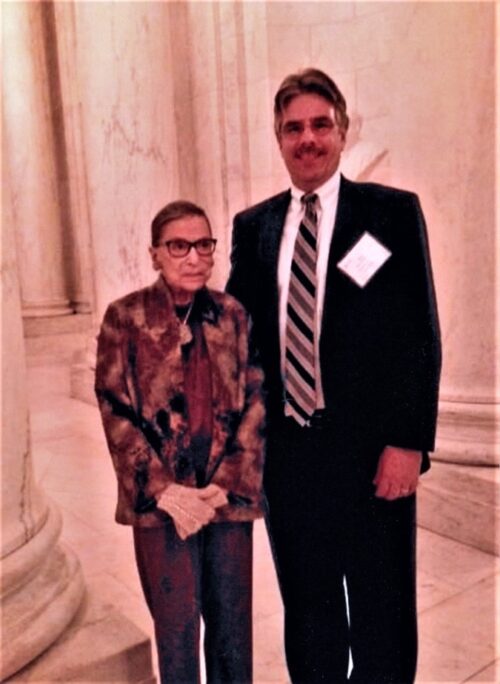 The year 2020 has been marked by tremendous loss, and the highest court in our land has been no exception. On September 18, 2020 Justice Ruth Bader Ginsburg, the second woman to sit on the Supreme Court of the United States, passed at 87 years old, surrounded by her family. [1]

Due to her almost 60-year legal career spanning from roles as a passionate academic, a trailblazing litigator, and a determined jurist, Justice Ginsburg has become a common household name. [2] In fact, her reputation has led to the infamous nickname, “Notorious RBG,” causing her influence to extend beyond the bench and into a pop culture phenomenon.

Third year law student and vice president of the Hispanic American Bar Association Alexandria Iwanenko recalled first learning about Justice Ginsburg while in high school, right after Shelby County v. Holder was decided. The case involved a challenge to the limits imposed by the Voting Rights Act of 1965 that were designed to prevent voter discrimination practices. [3] The Court held that section 4(b) of the Voting Rights Act is unconstitutional because it was based on old data that could not justify current limits. [4] Justice Ginsburg penned the dissent, comparing disposing of successful methods to prevent voter discriminatory practices “…like throwing away your umbrella in a rainstorm because you are not getting wet.” [5] In response to the decision, Iwanenko remembers thinking, “wow, we have injustice right here in the United States, in my country that prides itself in democracy and equality and fairness.”

Like Iwanenko, Shannon Shuttlesworth, third year law student and vice president of the Women’s Law Association, remembers first learning about Justice Ginsburg in high school. In a history class discussing post-World War II America, Shuttlesworth recalls learning that women at this time were seen as only fit to be mothers or perform womanly jobs. “It was during this class discussion that my teacher brought up RBG and went in great detail as to how she overcame the stigma of being a woman and mother in the legal field,” Shuttlesworth said.

“[My brother] attended Yale Law School at about the time as Justice Ginsburg attended Harvard,” Wilson Huhn, professor at Duquesne University School of Law, recalls. “There were only two women in his law school class, and they were only called on once – to answer a question about a rape case,” Professor Huhn continued.

As of today, approximately 50 percent of students graduating law school are women. [9] However, in a field where women have fought so hard for a seat at the table, there is still work that must be done. “It is still an uphill battle for our colleagues and clients to respect us to the same degree they respect our male counterparts,” Iwanenko believes. Particularly, there exists a disparity in women of color in law school. [10] “There needs to be work done that closes that gap within the percentage of law school students,” Shuttlesworth observes.

While attending law school, Justice Ginsburg faced additional adversity outside of the classroom. [11] Justice Ginsburg’s husband was diagnosed with testicular cancer while in law school, leaving her to care for him and their three-year-old child while simultaneously attending classes for both herself and her husband and keeping up with her law review duties. [12]

“Given the incredible demands law school alone places on one’s time, emotions, and personal relationships, I cannot imagine having to complete these responsibilities.” Stanley Marciniak III, third year law student and teaching assistant expressed. “This speaks to the tenacity of Justice Ginsburg and her dedication to her calling in life.”

Despite graduating top of her class, not a single firm in New York would hire her. [13] However, Justice Ginsburg refused to accept this set back. She became a law professor, founding director of the Women’s Rights Project for the American Civil Liberties Union (ACLU), and a federal judge. [14]

“I almost think, in some ways, her accomplishments are evidence of how much harder women sometimes have to work for their achievements and to close the gap between how men and women are treated,” Casey Black, third year law student and vice president of the Public Interest Law Association, notes.

During her litigation career, Justice Ginsburg worked tirelessly to persuade the Court that the 14th Amendment guaranteed equal protection to not just racial minorities, but to women as well. [15] “In the early 1970s, that was a daunting task because people assumed women were meant to work in the home,” President Gormley remembers.

According to Gormley, Justice Ginsburg’s method in achieving this was to break down the gender stereotypes but do so in a way that would convince an all-male Supreme Court bench to understand. “And she did, incrementally, brought the Court to understand that many of the laws at the time had the effect of harming women and preventing them from advancing,” Gormley continues.  “It took some time, but eventually the male justices on the Supreme Court came to agree with her.”

Justice Ginsburg would stress the inclusion of “any person” in the 14th Amendment and argue that “any person” included women. [16] “And the Supreme Court woke up to that reality in 1971,” she said. [17] Justice Ginsburg’s work pioneered a path forward for women, making great strides in closing the gap between men and women in this country. [18]

Professor Huhn and Ashley London – also a Professor at Duquesne University School of Law – have used Justice Ginsburg’s tenacity through her expansive career to motivate their own work. “It has motivated me to become the best teacher that I can be, and in particular to master online teaching so that my students can fully pursue their studies from home,” Professor Huhn states. Professor London adds, “Like her, I hope to inspire my law students to stand strong and not let anyone tell them they cannot succeed because of their gender, or race, or sexual orientation.”

Perhaps one aspect of Justice Ginsburg’s tenure on the bench that has brought her such notoriety are her numerous dissents. [19] She viewed her dissents as an opportunity to persuade future generations and hoped that one day she would live to see her dissents become the majority. [20] Many would say that she succeeded.

Marciniak particularly remembers Justice Ginsburg’s dissent in Ledbetter v. Goodyear Tire & Rubber Co., in which she called the legislature to action to override the majority’s opinion limiting the ability for victims of employment discrimination to obtain back pay. [21] “Her dissent led to President Obama’s championship of the Lilly Ledbetter Fair Pay Act of 2009, which superseded the case’s majority opinion legislatively,” Marciniak states.

Justice Ginsburg preached to “Fight for things that you care about but do it in a way that will lead others to join you.” [22] To Professor Huhn, this lesson reflects the importance of framing one’s argument to appeal to others. “You cannot persuade anyone by insulting them,” Professor Huhn explains. “You must appeal to their heart and their mind.”

“Her life embodied the values of decency, integrity, equality under the law, and the tireless defense of one’s legal convictions even if it meant dissenting from the majority view,” Marciniak comments. He adds, “We do a disservice to [our] values if we do not seek their championship with the utmost dignity and respect.”

Justice Ginsburg is frequently cited as a liberal justice or liberal icon, which often distracts from her role as a justice. Upon appointing her, then President Bill Clinton stated, “Ruth Bader Ginsburg cannot be called a liberal or a conservative; she has proved herself too thoughtful for such labels.” [23]

When asked about this quote, President Gormley remarked, “I think that the public tends to pin labels on justices as Democrats or Republicans, you see people trying to attribute political viewpoints to people.” President Gormley emphasizes that, “A good judge or jurist does not go to work every day worrying about how to advance a case, they go to work trying to understand the law and reach the right results. And Justice Ginsburg fit this perfectly, it’s what she devoted her life to.”

“Certainly, all Supreme Court rulings have political consequences, but they are not inherently political decisions,” Marciniak notes.

Many remember the great friendship that Justice Ginsburg and Justice Scalia shared during their lifetimes. [24] Perhaps what makes this friendship so memorable is the vastly differing legal perspectives that the two shared; they sat at entirely different ends of the spectrum. [25]

In President Gormley’s view, “It wasn’t political to them. They were both doing the best jobs possible to deal with very difficult issues, applying their principles.” President Gormley emphasizes that, “That’s how things should be, and we’ve grown towards turning out disagreements into personal attacks as if there’s something bad about people who reach opposite conclusions.”  Gormley concludes, “That’s a dangerous position to get into as a society.”

Justice Ginsburg’s death marks the loss of the longest serving female justice on the Supreme Court and a voice that fought tirelessly for justice and gender equality. [26] In Black’s view, “My initial thoughts [on her passing] were that Justice Ginsburg served our country tirelessly up until her very last moments.” Shuttlesworth adds, “She was the voice of women everywhere and I fear without her, our voices will be softer.”

While discussing her legacy, some believe that criticisms cannot be left out of the conversation, particularly regarding her record on criminal justice and race. [27] “All of the good that RBG championed during her tenure as both an attorney and as a justice was not untouched by white feminism.” Ellen Connally, third year law student and vice president of the Student Bar Association, observes. “I mourn the loss of a legal giant while also seeing conflict within her legacy and the path she started paving for us to take up and build better in her wake.” Connally adds.

Professor London shares this view. “I recognize that in spite of my challenges and hers, we are both white feminist women of privilege. There is so much work left to be done,” she notes. To pick up the torch and continue, Professor London suggests fostering cultural competency inside her classroom and “mak[ing] sure I am amplifying voices that are different from mine” to help future generations.

In the face of both triumphs and criticisms, Justice Ginsburg’s legacy provides lessons to us all. “RBG was a true servant leader, promoting empathy, listening, and commitment to those they lead,” Iwanenko explains. Of what lesson she has learned from Justice Ginsburg’s legacy, Iwanenko says, “Fight for the things you care about from the bottom up, not the top down.”

[6] Mimi Rocah, In honoring RBG’s legacy, ‘we must step out of our comfort zones and into rooms where we may not be welcome’, NBC News, (September 21, 2020 1:09 PM ET), https://www.nbcnews.com/know-your-value/feature/honoring-rbg-s-legacy-we-must-step-out-our-comfort-ncna1240629