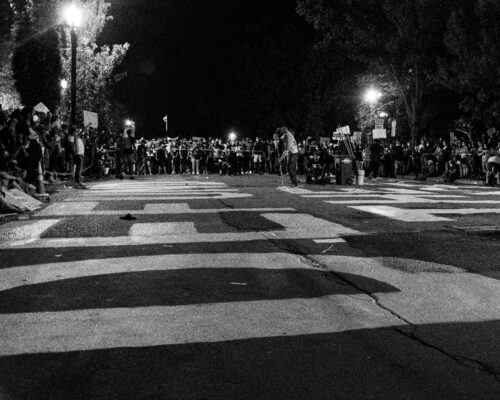 “Defund the police.” Since approximately June of 2020, this cry has been heard around the United States of America. [1] The slogan gained popularity following the death of George Floyd, a 46-year-old African American man, who was killed in Minneapolis, Minnesota during his arrest for the alleged use of counterfeit money. [2] The use of the phrase by several Black Lives Matter activists and those from other similar movements has caused both confusion and controversy throughout the nation. [3] But what does it actually mean? The answer depends on whom you ask. [4]

In light of the recent spike in police-related deaths, some are calling for the complete disbandment of law enforcement. [5] By August of 2020, there were approximately 164 police-related deaths of Black men, women, and children. [6] The rate at which Black Americans are killed is nearly three times greater than the rate at which white Americans are killed. [7] Despite the increased use of body cameras by various police departments and more rigorous media scrutiny, there is no reduction in the gap. [8] Due to these racial disparities and the history of brutality against Black Americans, some activists are calling for the dismantling of police departments. [9] They hope complete defunding will result in the creation of a new community-led model for public safety. [10]

To most others, however, “defund the police” simply means reduce police budgets and divest funding towards underlying societal issues, like poverty, homelessness, education, and health services. [11] Christy E. Lopez, Georgetown Law School professor and co-director of Georgetown’s Innovative Policing Program wrote, “It means investing more in mental-health care and housing, and expanding the use of the community mediation and violence interruption programs.” [12] Supporters of divesting funds argue that this is the best way to shift the priority to public safety after failed attempts at reformation of police practices. [13]

From 1993 to 2019, the national rate of violent crime has steadily decreased. [14] Despite fallen rates, the cost of policing has tripled. [15] From 1977 to 2017, data shows police budgets have increased from $42.3 billion to $114.5 billion. [16] In the past five years alone, the Pittsburgh Bureau of Police budget increased from approximately $76.8 million to $114.8 million, a 49% increase. [17] While there have been drastic budget cuts to education, housing, and other social services due to the COVID-19 pandemic, police budgets consistently grew or remained untouched, that is, until protests began. [18]

On June 7, 2020, the Minneapolis City Council announced its intent to replace its police department with the Community Safety and Violence Prevention department, [19] a “holistic model of public safety that actually keeps [citizens] safe.” [20] However, the city’s charter commission halted efforts in August over concerns that abolition of police would lead to a crime surge. [21] While the Minneapolis Police Department has not yet been “defunded” in the manner originally intended, the Council transferred $1.1 million, which is less than 1% of the police department’s funding, to the health department to finance “violence interrupters” who would work to de-escalate through the mediation of conflicts. [22]

Legislators and other elected officials are also reexamining their stance on police funding. [23] Some cities have seen success. [24] For example, in 2012, the city of Camden, New Jersey disbanded its entire police force in an effort to defund. [25] Thereafter, police chief J. Scott Thomson established the Camden County Police Department, hiring a greater amount of officers at lower salaries and emphasizing community policing. [26] Chief Thomson commented, “officers identify more with being in the Peace Corps than being in the Special Forces.” [27] After implementing changes, Camden, which had a murder rate greater than six times the national average, experienced its lowest rates since 1987, as well as a decline in violent and property crimes. [28] Additionally, most Camden officers are now equipped with Global Positioning System (GPS) tracking and body cameras. [29] The department even employs an extensive use-of-force policy and requires officers to intervene upon instances in which colleagues abuse their power. [30] Moreover, the department may fire non-complying employees. [31]

Changes were also anticipated at a federal level. [32] On behalf of Congressional Democrats, House Speaker Nancy Pelosi announced in June the “George Floyd Justice in Policing Act,” which would not only ban the use of choke holds and “no-knock” warrants in narcotics-related cases, but also require police departments to report use-of-force data to the federal government. [33] Additionally, it would establish a program allowing the state attorney general to investigate misconduct by police officers independently. [34] Federal officers would be required to undergo racial bias training and wear body cameras. [35] Other measures include implementing a national use-of-force standard, defining lynching as a hate crime, and limiting the applicability of qualified immunity. [36] Notably, however, this bill is entirely aimed at reform of already-existing policies and procedures, not at “defunding” the police. [37]

On the other side of the aisle, Senate Republicans proposed the “Just and Unifying Solutions To Invigorate Communities Everywhere (JUSTICE) Act”, which offers federal incentives to law enforcement departments that employ “best practices” and focus on ending “controversial tactics,” while penalizing those departments which make no such effort. [38] This bill would also encourage the reporting of controversial tactics to the federal government, in an effort to gather information. [39] Failure to make annual reports to a national database of each use-of-force incident in which “serious bodily harm” results or a firearm is discharged would subject the department to a 20% reduction in federal grants for the first year, and an additional 5% reduction for each year that data is not reported. [40] Additionally, the JUSTICE Act would impose hefty penalties for any police officer who “knowingly alters a police report in his or her favor,” which could include monetary fines and a maximum prison sentence of 20 years. [41]

Regardless of whether one takes “defund the police” to mean divestment of funding or abolition of law enforcement, even today, six months after the killing of Mr. Floyd, no new reformative legislation has been enacted; [42] however, if implemented, the modifications could be lifechanging for the nation as a whole.