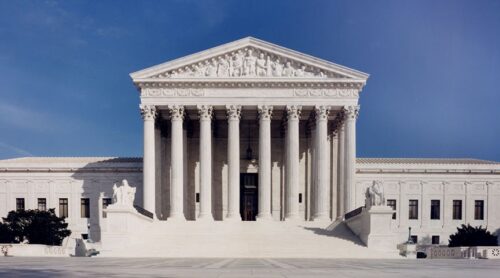 In the wake of the death of Justice Ruth Bader Ginsburg, President Trump and the Republican senators have brought a nomination and now new Justice forward, Amy Coney Barrett. [1] Her entrance into the Supreme Court has caused controversy, as it is a mere 8 days before the election. [2] In the midst of the nomination process and the upcoming election, one topic has been discussed by many, from journalist to being a trending hashtag on Twitter: court packing, also referred to as packing the court. [3] So, what is court packing, and how could it effect the Supreme Court?

Court packing was first introduced after President Franklin D. Roosevelt won his second term in 1936. [10] In his previous term, Roosevelt and the Supreme Court had been fighting over the passing of the New Deal, Roosevelt’s plan to help Americans during the Great Depression. [11] The Supreme Court had been striking down the New Deal legislations and not siding with Roosevelt. [12] In response to this, Roosevelt proposed a bill called the Judicial Procedures Reform Bill of 1937. [13] The bill stated that it would add one justice to the Supreme Court for each justice over the age of seventy, with a maximum of six additional justices, bringing the court to fifteen justices. [14] The bill was sent to Congress, directly to the Senate Judiciary Committee, as the House Judiciary Committee had rejected to hearing it. [15] Before the bill was voted upon, the Supreme Court upheld the Labor Relations Act and the Social Security Act, both that were supported by Roosevelt. [16] The senate did not end up passing the bill, as it was struck down by a vote 70-22. [17] Many legal scholars attribute this to “the switch in time that saved nine,” as the court ruling toward New Deal legislation saved the idea of nine justices. [18]

At the time of the birth of the Judicial Procedures Reform Bill of 1937, many criticized Roosevelt’s “court-packing” plan, as it seemed Roosevelt’s motive was to get the court to do what he wanted. [19]   Now, opinions on court packing are divided in its advantages and disadvantages to our judicial system, as it has been brought up for many recent justice appointments. Proponents of court packing state that packing the court could limit the one-sided viewpoint and allow for depoliticization. [20] This then, proponents argue, would create better representation for and of American citizens’ values and beliefs in the Court. [21] Opponents of court packing state that packing the court would result in the court being partisan. [22] Whatever majority party is in power could then put in justices that would vote the way that aligns with their party only. [23] The opponents state this would undermine democracy, as the courts would then move to one side or the other. [24]

Whether one is for or against court packing, the history of it has had a lasting impact on how Americans view the court system, and its flexibility.