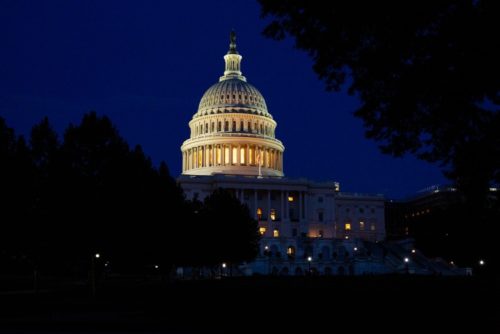 On February 5, 2020, the U.S. Senate ended the four-month-long impeachment era by voting to acquit President Donald J. Trump, who was charged with abuse of power and obstruction of Congress by the House of Representatives.[1] Fifty-two senators voted not guilty on Article I, abuse of power, while forty-eight voted to convict the President.[2] Fifty-three senators voted not guilty on Article II, obstruction of Congress, while forty-seven voted to convict.[3] The votes remained mostly among party lines, with the only exception being Republican Senator Mitt Romney of Utah.[4] Senator Romney voted to convict the President on Article I, but voted not guilty on Article II.[5] This move made Romney the first senator in U.S. history to vote for the removal of a president from his or her own political party.[6] In the following of his choice to break from his party, Senator Romney stated, “I know [there will] be consequences and I just have to recognize that and do what [I] think is right.”[7]

The Senate fell short of its two-thirds requirement by fifteen votes to convict and remove the President, but the battle over impeachment is still ongoing in some sense. House Speaker Nancy Pelosi has openly condemned the Senate’s trial, stating that the Senate’s failure to hold additional witnesses introduced by the House managers has caused the trial to be a “sham.”[8] Speaker Pelosi has also criticized the President, saying that he is “forever impeached,” and expressed her view that the President’s acquittal is not legitimate due to the Senate’s vote to not hold additional witnesses.[9] Pelosi has called the Republican senators’ votes a “betrayal of the Constitution,” and claims the President sees himself as being “above the law,” and as someone who thinks he can “corrupt the elections if he wants to.”[10] Pelosi was not the only Democrat unhappy with the vote to acquit the President, as the majority of the Democratic Party have accused Republicans of “emboldening an unchecked president.”[11]

President Trump has also made several public statements after the Senate’s vote to acquit him. The President has spoken against those who prosecuted his impeachment and other investigations against him, calling Speaker Pelosi and House Intelligence Committee Chairman Adam Schiff “horrible” and “vicious” people.[17] The President has called the entire impeachment inquiry “evil” saying, “[i]t was corrupt. It was dirty cops. It was leakers and liars. This should never, ever happen to another president, ever . . . it was a disgrace.”[18] But now that the impeachment has ended, the President has expressed his happiness saying, “[n]ow we have that gorgeous word, I never thought I’d hear it, it’s called total acquittal.”[19] Vice President Mike Pence has also joined in support of the President’s acquittal, striking at the President’s opposition by saying, “[l]et’s make sure it’s the last time Speaker Nancy Pelosi ever sits in the chair behind the President during the State of the Union address.”[20]

Although the time for impeachment has passed through the halls of Congress, this will surely be a subject of debate for the coming months, especially with the upcoming 2020 presidential election.